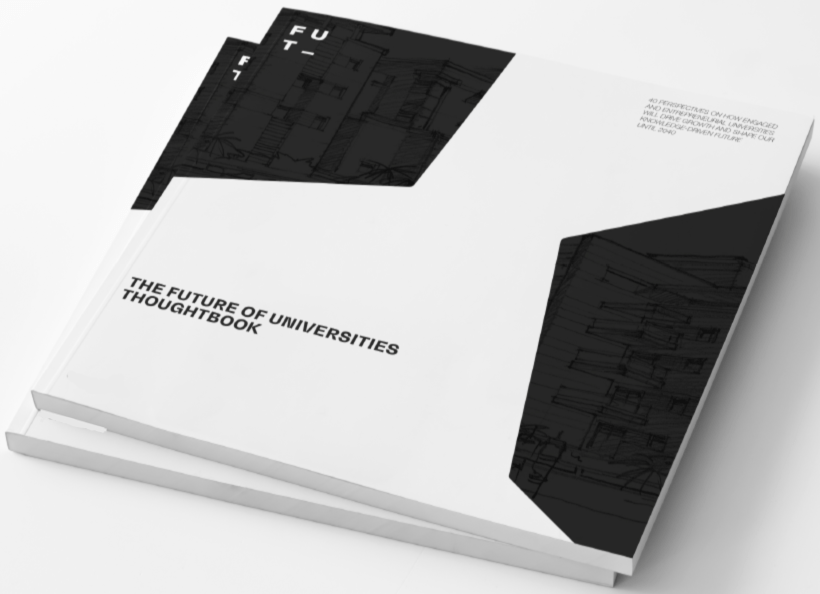 In the not-so-distant future Central Finland, a second-year student Aino checks into an online course from her home, where she meets her 1276 classmates. This MOOC is pretty standard sized, offered by a joint platform of all the universities in Finland for anyone in the world.

After the class she collaborates in a VR-based environment with some of her peers and a participating company from Central America. They go through the latest progress of their joint project. Global collaboration means having to work across several time zones, sometimes sacrificing personal schedules and activities to be able to fit online meetings into late evenings or early mornings.

Aino has a quick lunch and heads for a local coworking community space, Urban Impact, in the center of the city of Jyväskylä on a bike-share bicycle. Traditional offices are a dying breed. By the year 2040, coworking market makes up more than half of all the office space market globally. Freelancers, startups and small businesses were first to seize the benefits of collaborative shared spaces back in 2010s, but corporations, public organizations and universities followed soon.

Despite AR / VR user experience being light-years ahead of what they were at the time of Microsoft Hololens or Oculus Rift, nothing has fully replaced the need for having a real physical connection with fellow human beings, face-to-face.

In Aino’s city, Jyväskylä, there are several different coworking communities that people can access. Most of them have one or two specific thematic focus areas so that people can easily find what interests them most. Urban Impact is the one that Aino prefers, since like everyone else in the community, she shares an interest for the theme of urbanization and solving its many issues. It’s a place where members of local community, students, university staff members, startups, municipality and established businesses meet each other and do projects together.

Like almost everyone of her age group, Aino has never been employed by anyone else but herself. Everything needed for doing business is already linked to her European ID, including invoicing, taxation and bureaucracy. She knows that her parents used all sorts of service platforms as “light entrepreneurs” to do some freelancing when they were students, but there’s no such need for her.

Aino’s skills and services are easily accessible via AI-driven knowledge market platforms. This month, she has gotten 29 matches with her profile. Most assignments have been micro jobs, something that can be finished over the course of couple days, but during the past year she has been a part of a different bigger project as part of her university studies that is now being spun out into a new company at Urban Impact.

Some local university staff members are going to be involved in part-time roles at this aspiring startup, and one of them has asked Aino if she’d like to do some project research for them. This is why Aino is at Urban Impact today.

It’s yet another example of adhocracy, the way how working life has found a way to organize the  outputs of labour. Borders between companies and institutions have blurred. In 2040, people organize and re-organize their work around projects in temporary ad hoc teams, without traditional employer-employee relationships. Same goes for most university staff members, who rarely do 100% research or education on university payroll.

What really helped universities to adjust to this situation were the steps that university administrators took towards increasing staff mobility by allowing university-business-cooperation -minded researchers and teachers to do part-time or temporary work outside universities, or even becoming entrepreneurs while retaining their job at university. These chances weren’t always easy, since institutions resist change and any risk of uncertainty. However, as the societies became increasingly VUCAtional (volatile, uncertain, complex and ambigious), there was no other alternative.

In many ways, universities of 2040 are still recognisable for people who talked and wrote about the future 20 years earlier. Universities undertake research and disseminate their new knowledge.  Their campuses are spread out across the world, many as part of coworking communities, usually in the city centers since that’s where creative individuals want to be. Traditional types of university-business cooperation (UBC) have been revolutionized by the fact that the individuals who are devoted to addressing societal challenges increasingly act as universities’ counterparts, rather than (big) businesses.  People-oriented and mobility-driven types of UBC are the new norm. Furthermore, universities “studify work”. This means validating the learning that happens in real-life projects and at coworking communities. People get credits for these actions after having demonstrated their skills. Same time they create an impact for the society by actively creating solutions for real world issues.

Two new professional roles started to emerge in late 2010s for universities, and coworking communities linked to them. They became curators, who follow the endless deluge of information flows and curate the content, bit like art curators of museums picking up the best, and most relevant, pieces for the public. In their other role they became bridgers, who are inherently curious about pretty much everything, and as generalists, make surprising connections between people.

It was often the universities of applied sciences that were among the first to seize the change. Without historical burden of their traditional scientific counterparts, they were able to try out new approaches with high risk-taking.

By the time Aino arrives at Urban Impact, another student is already there, Alexey, whom Aino met during the same university project. Alexey is older, pushing past fifty years of age and holds a prior Bachelor’s degree. Now he’s doing a microdegree. Lifelong learning is yet another staple for universities of 2040. Speed in technological development and a 24/7 connected global work market, where the need for talents know no boundaries, mean that everyone needs to update their skills on regular basis. Various microdegrees offered by the universities for specific niches are far more common than they were earlier. In volume of participants they surpass traditional degrees greatly.

Aino and Alexey socialize for some time, before the university professor arrives and starts explaining how he would like to involve them in the startup. The prototype solution that they built and tested for a local urbanization-related problem during the project has potential to work on a bigger scale – and could be scaled globally with the help of other coworking communities elsewhere. Would Aino and Alexey like to spearhead this activity and with their research validate its impact?